A College of Agriculture, Food and Environmental Sciences (CAFES) Program 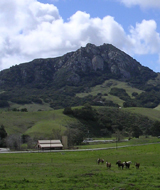 Preparing leaders in sustainability through education, research, outreach, and operations.

To forget how to dig the earth and to tend the soil is to forget ourselves.

Beekeeping at Cal Poly is a longstanding tradition begun in the 1950’s with the construction of the Honey Room, and has since grown to a Bee Unit maintaining over 100 hives.  Students interested in bees and the management of bees for honey production, queen bee breeding, and crop pollination, as well as the thrill of handling hives of live bees, can get involved through the Beekeeping class (FRSC 123) and the Honey Student Enterprise (FRSC 202-05) within the Horticulture and Crop Science Department. Through the Beekeeping class, students can gain an understanding of the fundamentals of bee biology, their fascinating behaviors and social structure, and their commercial applications while getting directly involved with beehive care and the honey production process.  Those in the Honey Enterprise gain a more thorough hands-on experience with honey processing and marketing, the maintenance of healthy hives, the breeding of pest and disease-tolerant bees, and the transport of hives throughout Cal Poly lands to pollinate campus crops.
The Honey Enterprise produces up to 4 barrels of honey a year (one barrel is 55 gallons and weighs nearly 650 pounds when full!).  The finished product is bottled as Cal Poly Honey and is available at the Campus Market and the Poly Plant Shop year-round.

The health and breeding of bees within the Bee Unit are maintained without the use of antibiotics or fungicides.  A new food grade miticide called HopGuard (derived from the same hops that are used to brew beer) is now being used to control the Varroa mite, an ectoparasitic mite that contributes to bee declines by vectoring a slew of pathogenic viruses.  In addition, as the queen of each bee colony is the only female responsible for reproduction, a new technique called mechanical insemination, a microscopic technique for artificially inseminating the queen bee, is being introduced to breed strains of managed bees that are hardy and have other desirable qualities.  The Cal Poly Bee Unit is one of only a few beekeeping labs in California to host this technology.

Global Perspective:  Beekeeping is one of the oldest systems of agriculture in the world, and the sweet and soothing properties of honey have been appreciated for thousands of years. Today, Americans consume over 400 million pounds of honey a year, but the agricultural importance of bees extends beyond their production of honey. Approximately one-third of U.S. crops worth more than $20 billion a year (in 2000) rely on pollination by bees for reproduction.  While feral and managed honey bee populations have been declining for several decades, the rate of disappearances accelerated drastically beginning in 2006, attributed to a phenomenon called Colony Collapse Disorder (CCD).  A number of factors have been proposed as contributors to CCD, including viral and fungal infections, antibiotics, malnutrition, and exposure to pesticides.

The 2008 Farm Bill began a government commitment to support honey bee and native bee research and conservation programs and for the first time established pollinator conservation as a “national priority resource concern.”
Pollinators provide an ecological service that is vital for the world’s wild and agricultural ecosystems, and their recent global declines have drawn concern from the media, community groups and international government agencies.  Urban and rural communities are increasingly involving beekeeping, swarm recovery, and pollinator-friendly landscaping on their lands in an effort to combat the effects of CCD.  The Food and Agriculture Organization (FAO) of the United Nations is currently coordinating a Global Pollination Project among seven countries to identify and implement sustainable agricultural practices that enhance the conservation of pollinators.